Cakes: 1 croissant each; 1 pain au chocolat each; Coffee 2 x each

Today the temperature reached 33 degrees centigrade, which was plenty hot enough, especially as today was the first of the real hills. We got a reasonably early start after a magnificent breakfast provided by our fabulous hosts at the Chambre d'hotes in which we stayed last night (gently reminded of the hour, each hour, by the church bell across the way!) 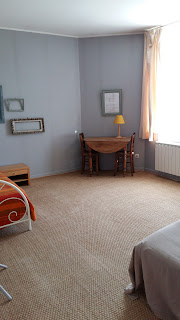 John's eye, after being viscously attacked by a hornet yesterday, is rather swollen, but otherwise he felt OK so we hopped on our bikes, made a stop at the boulangerie in the next village, and then started on our way. 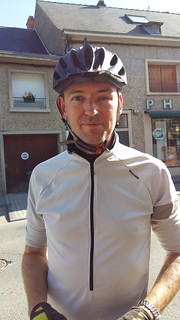 The hills were what is often described as rolling (with some extra steep bits - and no one to provide a round of applause and encouragement as I experienced one time in the Champagne region). The views initially were of arable fields and stately wind turbines, then fields of poppies and orchards, then chalk escarpments, paddocks with cows, and patches of forest. 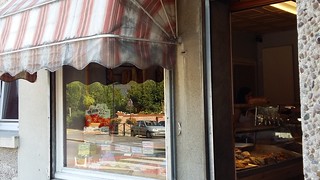 Views were admired while trying not to think about straining leg muscles, and the fact that you have no gears left to pop into...and there is still quite a lot of hill to go. We gradually climbed to the point where we could see for miles, and it was lovely! Little villages nestled in beside stands of trees, always with a church, which always has a different spire or flourish to it. 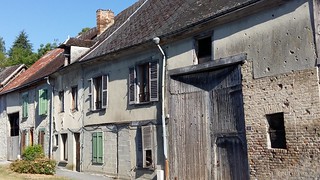 The lunch spot was idyllic. Beside a gently flowing river, under the shade of trees, with watercress to pick as an accompaniment to our usual lunch of fresh baguette, divine French cheese, tomatoes and apples. One of the highlights was spotting, under an old plank, the tops of columns from what looked like a Roman villa.

The only problem with lunch is the après eating lassitude and heavy legs...tough going for the first few minutes, especially when it's up hill as it was today for us. 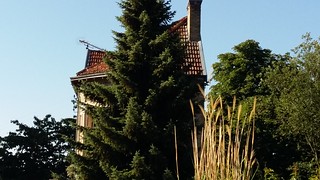 We made a final descent into the gorgeous town of Charlesville. After putting up our tent in a rather splendid campsite, we ventured out into the town for a good look around (the stone in this region is a golden pink, compared with the much blonder stone we've seen over the last few days). The town square is huge, and surrounded by stately townhouses. The sunset added an extra edge to the colour of the stone, and I couldn't stop taking photos.

We're just about to turn in. It looks as though it will be another 30+ degree day tomorrow, but the hills should be fewer - and hopefully John's eye will have gone down a bit (people keep giving me funny looks as though I had clocked him one!)